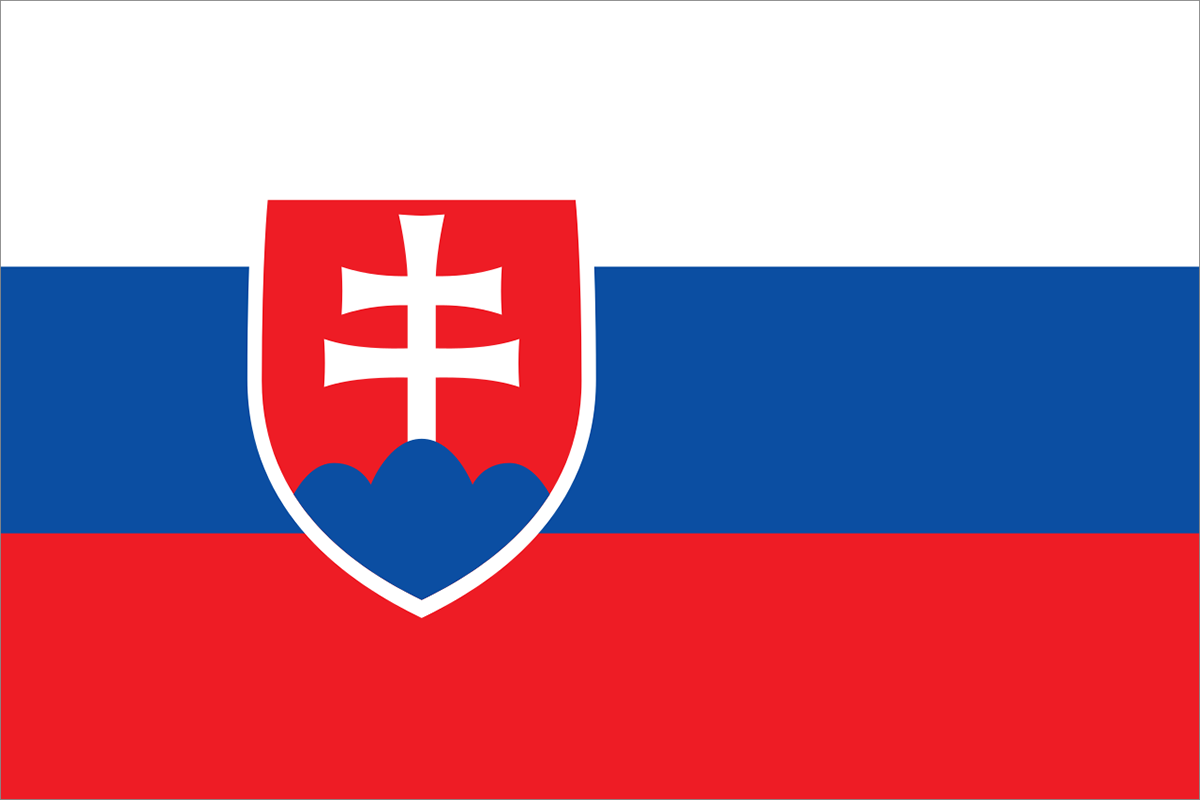 Slovakia is a landlocked country in the center of Europe.

Slovakia borders Poland to the north, Ukraine to the east, Hungary to the south, Austria to the southwest, and the Czech Republic to the west/northwest.

Slovakia is 49,037 square kilometers / 18,933 sq mi, ranking in size between Costa Rica and the Dominican Republic. 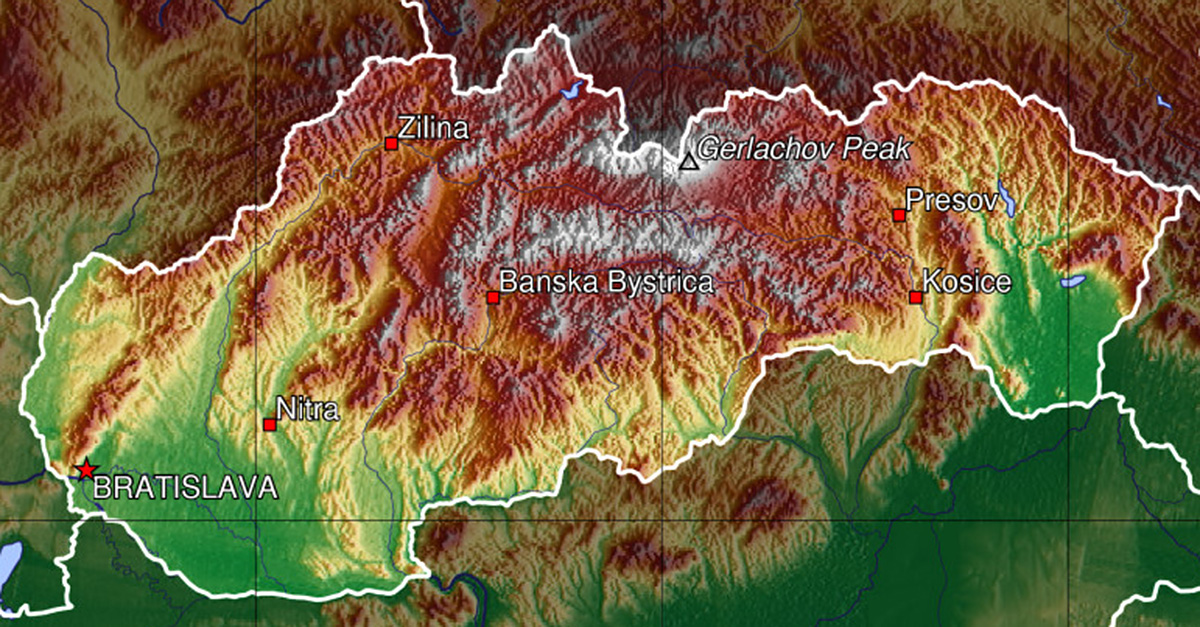 The highest mountain is Gerlachovský štít (Gerlach Peak), colloquially known as Gerlach, at 2,655 meters / 8,711 feet; the lowest point is on the Bodrog River at 94 meters / 308 feet above sea level.

Slovakia is divided into 8 districts/regions, with each kraj named after its respective seat:

The country is further divided into 79 counties.

The administrative division of Slovakia being relatively new, the borders of districts aren’t defined clearly in Slovaks’ minds. Many Slovaks still use the pre-1993 division into western, central, and eastern Slovakia when referring to locations.

Cities and Municipalities of Slovakia

There are 140 cities and 2,933 additional municipalities (towns and villages) in Slovakia.

After Bratislava, these are the 10 largest cities in Slovakia by population (all data is 2017):

Slovakia is a country of small towns. 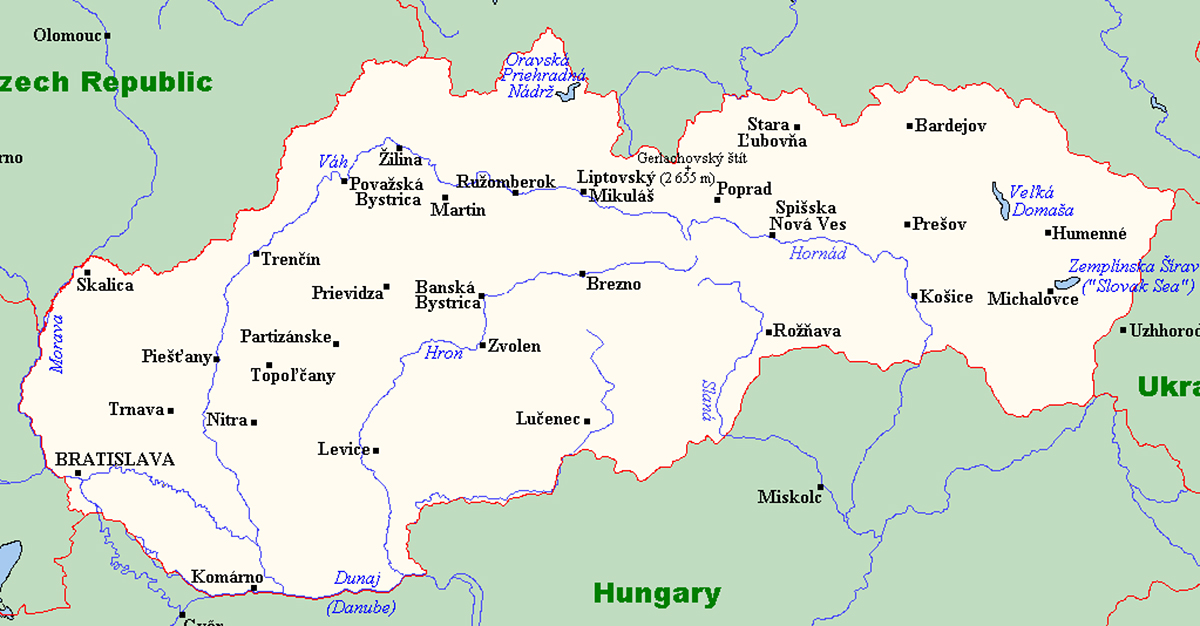 Slovakia being a land-locked country in the center of Europe, her climate is moderate continental, with four distinct seasons. Winters are cold and humid; summers are hot and dry.

Rain. The wettest place in the country is Zbojnícka chata (Highway Robber Chalet) in the High Tatras, getting some 2,130 mm / in of rain annually; the driest place is Galanta with only 483 mm / in of rain.

Sun. The sunniest place is Hurbanovo. The least sunny is Orava.

Wind. The windiest place is Chopok mountain. The highest recorded wind was at Skalnaté pleso (Boulder Tarn) in the High Tatras, in 1965, with 283 km/hour or 176 mi/hr.

The official name of Slovakia is the Slovak Republic.

Slovakia’s official symbols are the flag, the seal, and the anthem.

Slovakia’s flag consists of three equal horizontal stripes, white, blue, and red, against the first half of which is placed the country’s coat of arms comprising a white double cross standing on the middle of three blue hills against a red background.

The three colors historically originated in the Russian flag, which itself was inspired by the French tricolor. The white double cross is said to have been brought to the area of today’s Slovakia by the Byzantine missionaries Cyril and Methodius in the 9th century AD. The blue hills are said to represent the ranges Tatra, Matra (in today’s Hungary), and Fatra.

The Slovak coat of arms is based on the sinister of Hungary’s 15th century coat of arms, whose background is green, mountains are red, and the royal crown sits at the base of the cross.

The Slovak flag’s dimensions are 2:3.

Seal of the Slovak Republic

Slovakia has been in existence as a country since January 1, 1993 (see History below).

Slovakia is one of the most religious countries in the European Union, with 63% of citizens professing faith in a god (the EU average is 51%). About half of religious Slovaks attend church at least once a week; the other half go to church only on major holidays.

Religious composition in Slovakia is as follows:

Slovakia’s ethnic composition is as follows:

Some 230,000 Slovak nationals live outside Slovakia; most Slovaks abroad live in the Czech Republic, Germany, Austria, Great Britain, and Ireland. More than 1 million (2.1 million according to some sources) people around the world claim Slovak ethnicity or ancestry (more than half of them are in the United States).

Slovakia is a tiny country, so even the most minor of celebrities garner a lot of national pride. Famous Slovaks, whom you can count on one hand, tend to achieve fame after leaving Slovakia.

Other famous people with a Slovak connection include:

Móric Beňovský (1746-1786) – One of the most colourful characters in Slovak history, a nobleman who during his relatively short life managed to be an adventurer, globetrotter, explorer, colonizer, writer, chess player, a French colonel, Polish military commander, and Austrian soldier. Above all, he managed to get himself elected as King of Madagascar (!) by the natives in 1776. His memoirs were a bestseller at the turn of the of 18th and 19th centuries. His life was a source of inspiration for many writers, poets, and composers.

See links throughout this article for sources. In addition, information is based on resources provided by