How Not to Drink Alcohol in Slovakia

I ♥ SVK13.8.2018Culture
Sausages as prizes in a kapustnica cookoff. Photo by Bratislavský kraj. 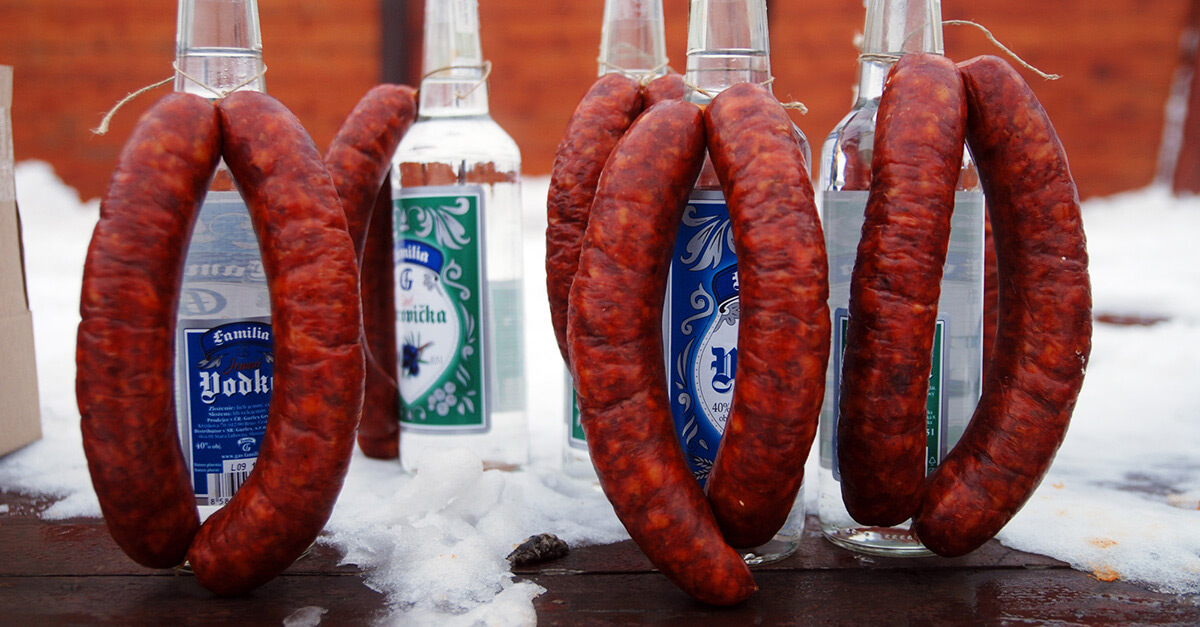 In 2015, the daily Pravda asked, “Alcohol is winning in the country. How to change that?” If you travel in Slovakia, you will encounter cheap booze and a very hospitable culture of drinking. So how can you not drink alcohol in Slovakia?

A Drinking Culture with a Mountains Problem

Together with other Central/Eastern European countries, Slovakia leads European statistics in alcoholism and related diseases, with rates increasing since the 2008 crisis.

Slovaks aged 15 and over drink 13 liters of pure alcohol per year, of which 46 percent is spirits, 30 percent is beer, and 18 percent is wine. This places Slovakia as the world’s #10 country (incidentally, tied with the Czech Republic), according to the World Health Organization.

In the companion article to the Pravda article titled, “People who don’t drink are considered extra-terrestrials”, a psychologist quoted opines that the causes of alcohol drinking and alcoholism in the country are deeply rooted in history and the evolution of lifestyles, including the tradition of illegal distillation of spirits in villages, longer working hours, and economic pressures combined with financial stress.

A Slovak who doesn’t drink is considered an alien, disrupting a societal stereotype.Alica Kantorková, Center for Drug Addiction Treatment

The phenomenon inspires not only a lot of pontification and head-shaking, but also humor.

In 1981, the famous comic duo Lasica & Satinský had a skit about drinking in Slovakia. The skit culminated with the Jaro Filip-authored song, “In Our Village,” which opens with these lyrics:

In our village everybody drinks
except for George.
Everyone is wondering
what’s wrong with him.
He’s just like us,
healthy, strong, and stingy,
so why does he
distance himself from us like this?

The problem with George, who, it turns out, simply doesn’t like the taste of alcohol, gets resolved when the angry villagers stick a pitchfork in his behind.

The satire underscores the cultural aspect of drinking in Slovakia.

Alcohol in Slovakia: A Personal Experience

When I was a boy, growing up in Košice, from about elementary-school age my father would let me and my sister sip the foam off his beer at the pub near our family’s weekend cabin.

I knew I was becoming a man in the eyes of my family when chocolate eggs and cash I’d get on Easter for dousing womenfolk with perfume and water were replaced with shots of spirits.

In high school, I’d sometimes sneak out during afternoon free periods to buy beer at a nearby grocery store, which my friends and I would drink right outside (some of my classmates would go further and pound a few beers at a brewery down the street). During a Cassovar Brewery excursion each student drank a full glass of unpasteurized beer under the supervision and a toasting hand of our home-room teacher.

In college, well, we all know what happens in college.

Here in Portland, Oregon, where I live, expatriate / exile / emigré Slovaks and Czechs meet monthly at a brew pub.

Tips for Staying Sober in Slovakia

Despite the fact that alcohol in Slovakia is cheap, even after 10 years in the European Union; that drinking is a national sport; and that “No” isn’t commonly taken for an answer, it is possible to not drink. Just follow one of more of these simple tips:

Sausages and vodka as prizes in a kapustnica cookoff. Photo by Bratislavský kraj.

Slovaks on Not Drinking

This is a conclusion my fellow Slovak travelers and bloggers drew when I asked, in the Facebook group Digital Nomads of Slovakia, for their tips how to avoid drinking alcohol in Slovakia. Interestingly enough, there are many non-drinkers among the traveling Slovaks, many of whom left the country to get away from the culture, the same way many Americans do.

An earlier version of this article appeared at Where Is Your Toothbrush?

Peter Korchnak is an author.