Beyond Zlatý Bažant: 8 Brands of Slovak Beer You Must Try 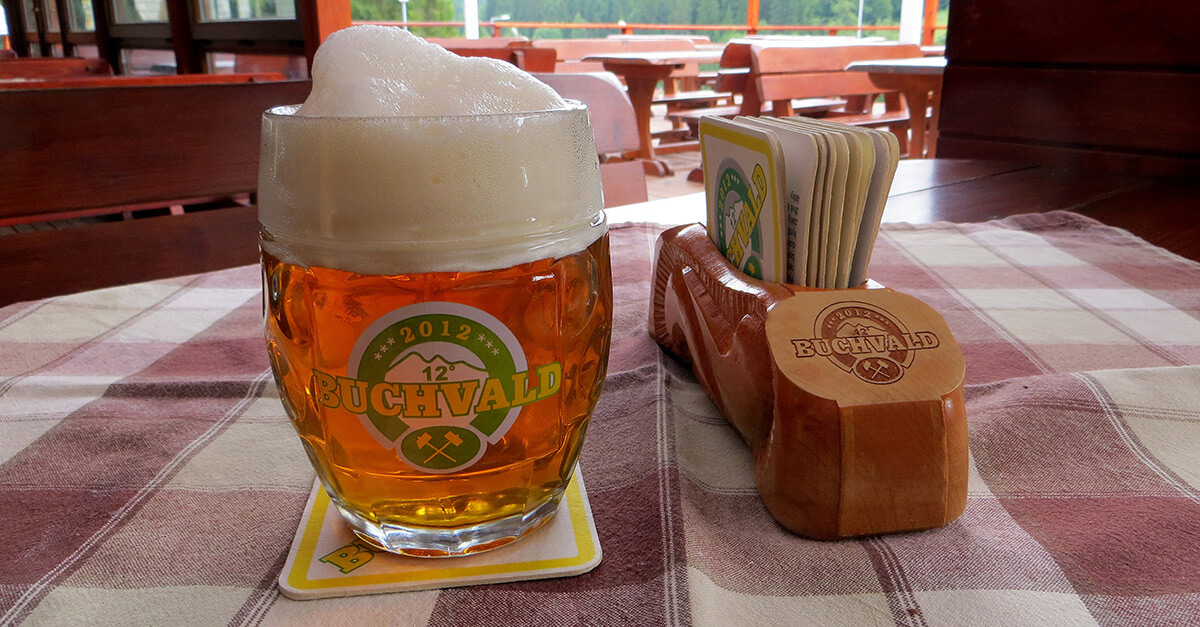 Every beer lover visiting Slovakia will inevitably sample Zlatý Bažant, an old Slovak beer brand now owned by Heineken, as well as Šariš, Corgoň and Kelt. But there is more to brews here than the major brands of Slovak beer. Slovakia’s craft beer industry is burgeoning: today nearly 70 microbreweries—or mini-breweries, as Slovaks prefer to call them—make and pour (mostly unfiltered) liquid gold around the country.

Beer may not be the national drink of Slovakia—that honor belongs to borovička, a juniper spirit—but it might as well be. In the late 1980s, the punk band Zóna A famously reflected the Slovaks’ attitude toward beer in their anthem “Pivo” (Beer): “In the morning, for lunch, and in the evening / Beer, beer, beer.”

No matter what time of day you imbibe, these are some of the best brands of Slovak beer of the craft variety you should try.

Buchvald Lager is hands down the best 12° lager in Slovakia.* The only place in the world where you can drink it is at a restaurant adjacent to the brewery at a recreation resort in Poráč Valley.

Nicknamed the Valley of Dreams, the Poráč Valley sits in a remote part of Eastern Slovakia, about 1.5 hours northwest from the regional capital Košice and about a half-hour from Spišská Nová Ves. The one paved road leading here literally ends in Poráč, the village overlooking the valley.

Buchvald Minibrewery opened in 2013, and the “twelver” remains its only brew. Lagered for 12 weeks, the beer is refreshing, with just the right amount of bite and strength. It’s so crisp and clean some Slovaks claim it’s the only beer that doesn’t give them headaches.

Enjoyed on the restaurant terrace overlooking deep woods where wolves roam, to the sound of a pair of bleating sheep, Buchvald Lager is the definition of the rural Slovak summer.

Meštiansky Pivovar’s 12° Bratislava Lager quenches thirst with a bite that reminds you you’re solidly in Central Europe (the only other beer the brewery offers from its own production is the dark lager Bubák, which translates roughly as Bugaboo).

The brewery builds on the capital city’s 550-year history of brewing, particularly Burgher Brewery, which operated from 1752 to 1968.

The brewery has two locations: the Garden Brewery on Dunajská Street, where you can enjoy your beer and Slovak pub fare on a large outdoor patio, and the much smaller, indoor-only brew pub on Drevená Street. 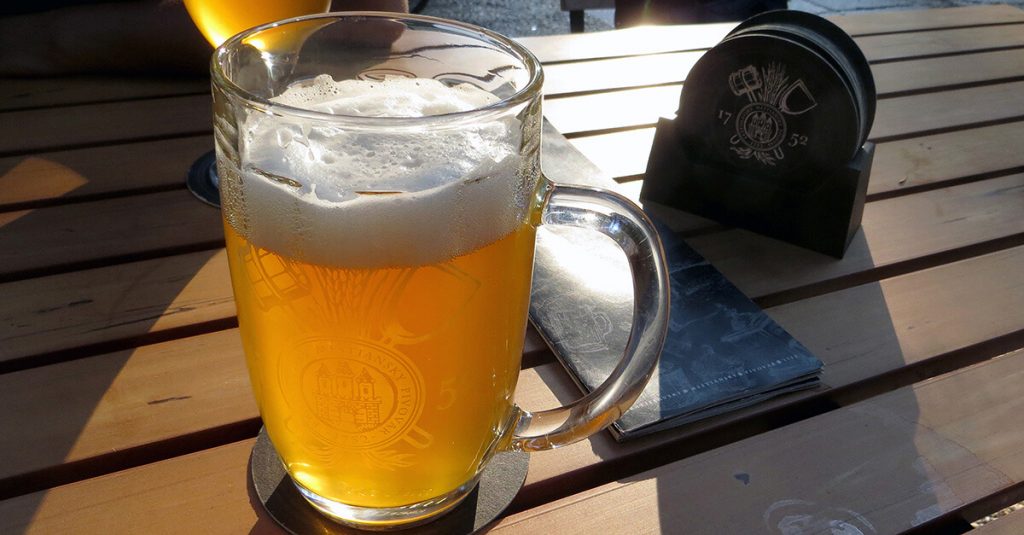 The Bratislava Lager on the Dunajská Street patio

Pivovar Golem was the first microbrewery in Košice, Slovakia’s second largest city. The quality of their microbrews has steadily increased. 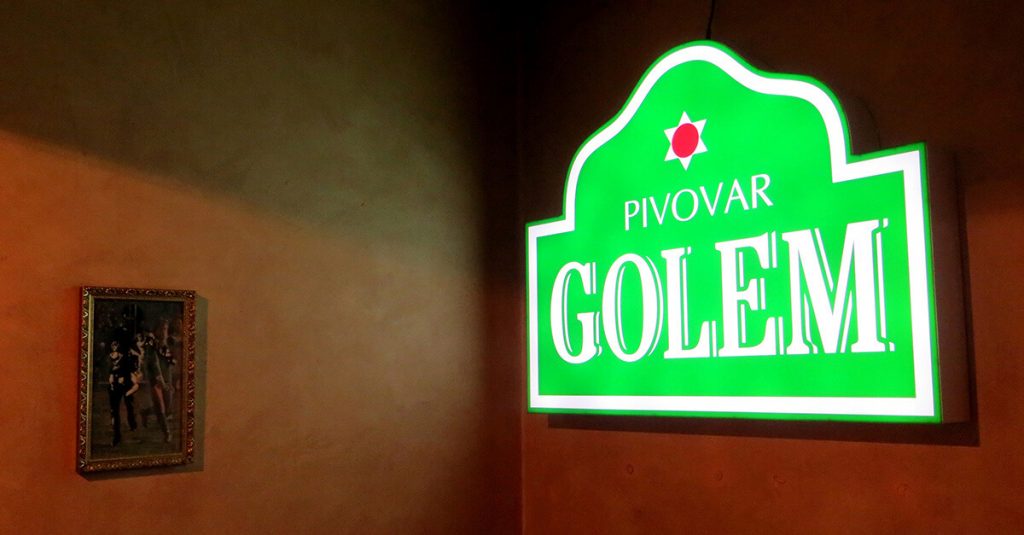 Lighten up at Golem Brewery

The flagship 11.5° Golem (the other beer on the menu is a dark 13°) is lemon-yellow and cloudy, with a smooth, balanced profile. So much so, in fact, that the beer lost a little bit of its character from the first batches served when the brewery first opened in 2011.

No matter: if you take shelter from the hot afternoon sun in the cool, old-Prague-themed brew pub that sits in the shadow of the Košice’s oldest building, the late 13th-century Dominican Church, the light Slovakian beer will quench your parched throat in a memorable, unfiltered way. 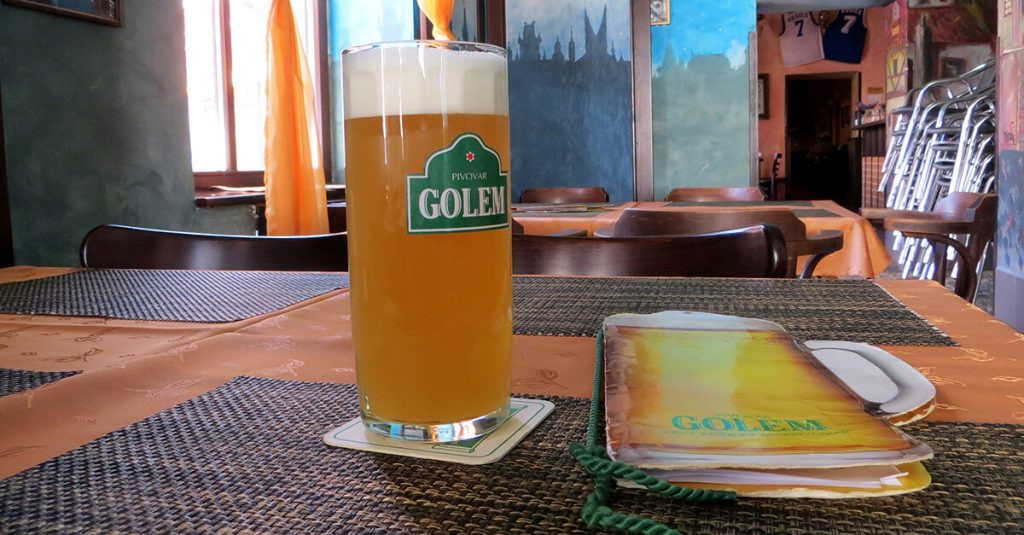 A 11.5° at Golem. Note the Prague decor in the background.

Like her stronger brethren 12° Jakub, the 10° Anna has an unusual aftertaste of a beer made by a brewer who loves high-ABV beer. That the beer retains a medium body and lower ABV than you’d expect makes it a definite stand out. On offer, too, are tasty, if dangerous, pairings of beer with local spirits.

The “first minibrewery in Bratislava,” Richtár Jakub is located behind an unmarked door on a quiet street near a historic cemetery. The cramped main room opens onto an even smaller patio, where you can sample a variety of the brewery’s products as well as other Slovak and Czech microbrews sitting shoulder to shoulder with fellow beer lovers. 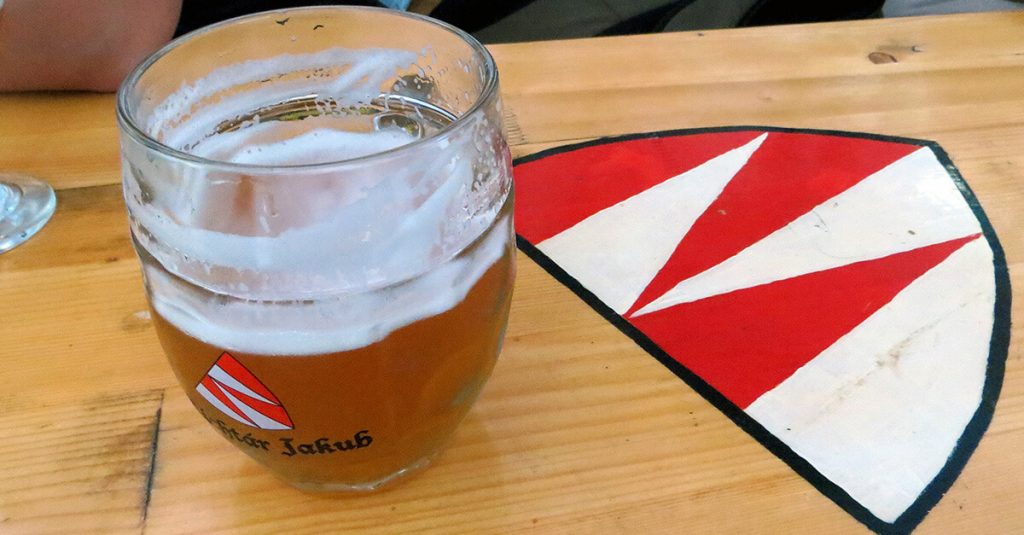 A large lager at Richtár Jakub

The Egidius Minibrewery can offer a nice conclusion to your short tour of tiny downtown Poprad. The interior may be a tad confusing for a craft beer fan, what with the slick black-and-white decor better suited for a cocktail bar and the Euro dancepop blasting from the stereo. But though Egidius is far from the best craft beer Slovakia has seen, it is a must-try if you are in town.

The lighter brews lean toward the sour side, the dark ones toward the sweeter (you can order small samples). We recommend the 13°, a balanced, dark-hued lager with a citrusy tang and a big malty backbone. If you’re into lighter Slovak microbrews, try the unfiltered 10°, and if you want something more flavorful the dark, porter-y 11° is like a liquid dessert, and the dark 12° has hints of coffee and Kofola, the Slovak response to cola. 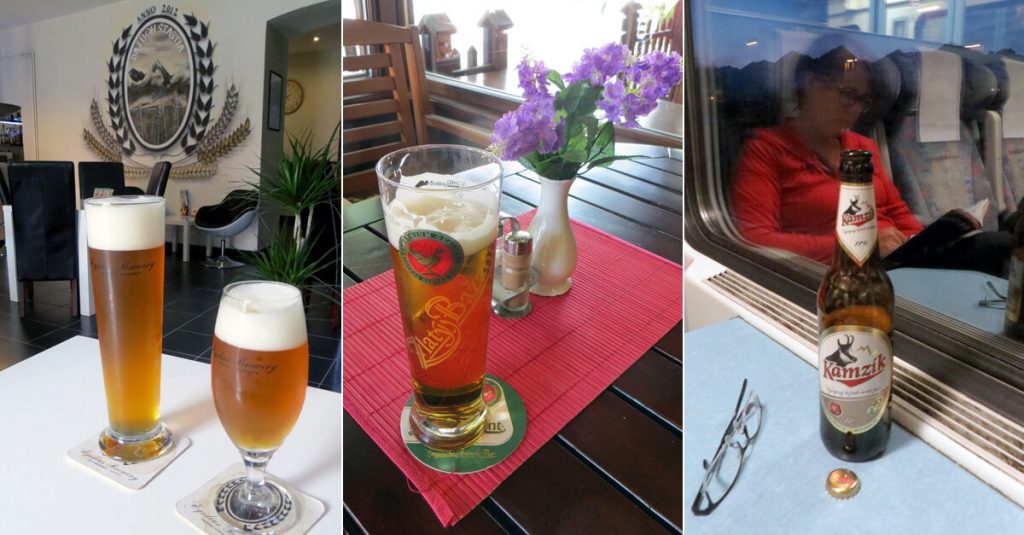 Slovak beers (from left): Beer at Egidius Brewery; Zlatý Bažant at a Poprad restaurant, and Kamzík, a light Poprad beer on a train to Poprad

Zámocký Pivovar’s 10° lager is as refreshing a beer on a hot summer day as it gets. Distinctive hints of noble hops and the citrus-y middle make it a perfect thirst-quencher.

The brewery’s location, at the bottom of a street leading up to the Bratislava Castle, makes the brewery a great start or conclusion of any sightseeing tour. On workdays, you can have the spatious, cool main room to yourself, but the place does fill up on Friday and Saturday nights. 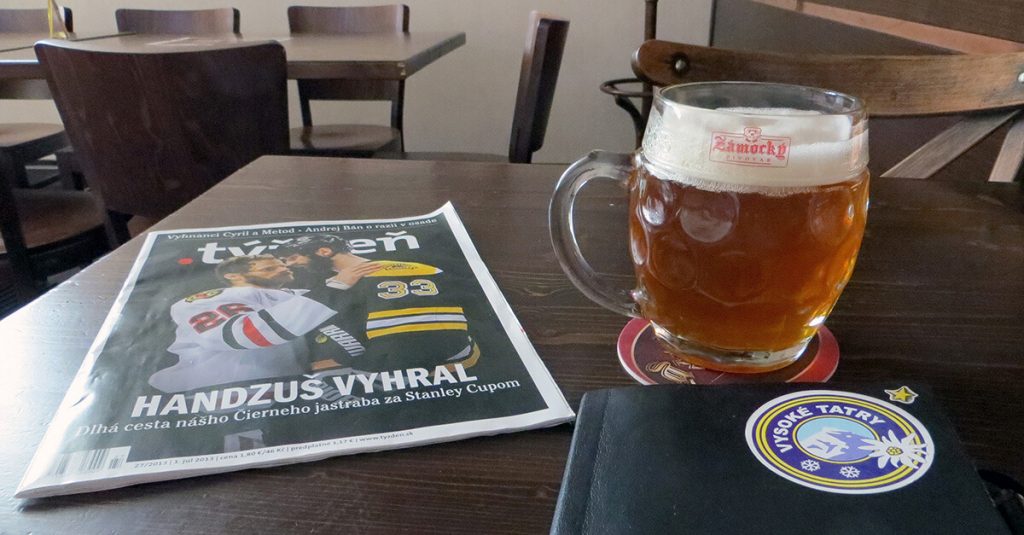 A lager by the Bratislava Castle

Patrónsky Pivovar prides itself in unfiltered and unpasteurized natural beer, similar to many other Slovak microbrews, the hallmark of the country’s microbreweries. Cloudy and refreshing, the 11.5° Patrón (Bullet) has a yeasty tang with a only a slight hoppy bite (the brewery also serves a dark 11° lager).

The brewery borrows its name from its location: Patrónka is a transportation hub on the road to Brno and Prague where a bullet factory used to stand until the 1937. As an air-conditioned reprieve from the summer heat wave and the busy road, walkable from downtown in 45 minutes, it feels like a place for the area families and working people to hang out. The menu, in the form of a Patrón Newspaper (in Slovak only), underscores the owners love beer and brewing it as well as the history of their location. 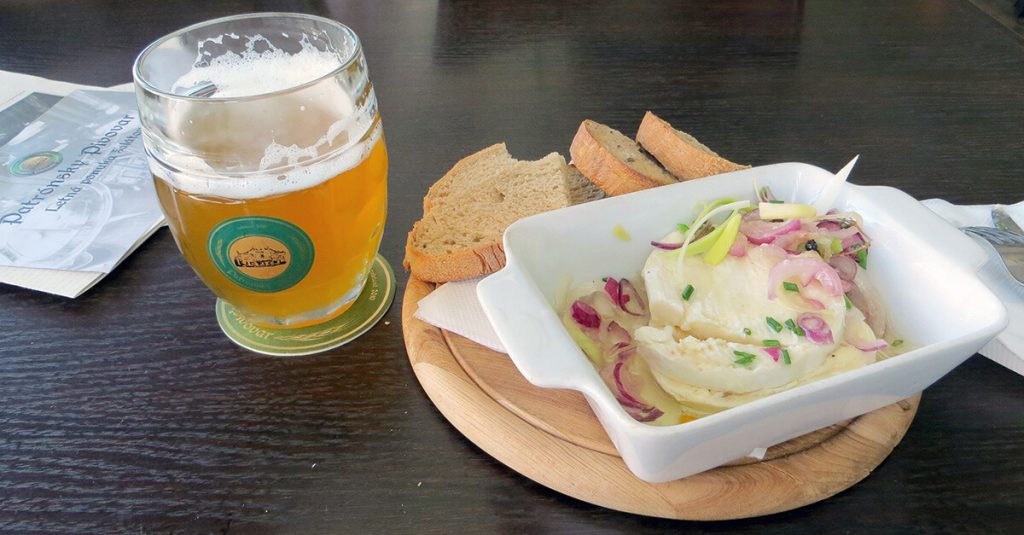 We saved the best Slovak beer for last. Since 1997, and particularly after an expansion in 2012, Kaltenecker has become the best known of Slovak craft beer brands, distributing from their Rožňava facility all over the country. With good reason: they produce excellent, non-traditional beers.

Any Kaltenecker brew you try will be a craft beer-lover’s treat, but if you can try the 17° Chopper Black IPA, do not hesitate (the 15° Chopper IPA is like its little brother). It is the best non-lager beer in all of Slovakia, which would hold its own, if not more, with any dark IPA in the U.S. Its smooth, creamy, hoppy goodness can make you feel the world is alright.

* In Central Europe, the degrees Plato measurement is used in brewing to indicate beer gravity, the strength of beer by sucrose content. The higher the degree, the more alcohol-content and the stronger the beer. Ten-degree beers have ABV (Alcohol by Volume) in the 4% range, 12° in the 5% range.

Portions of this article first appeared on Where Is Your Toothbrush?.